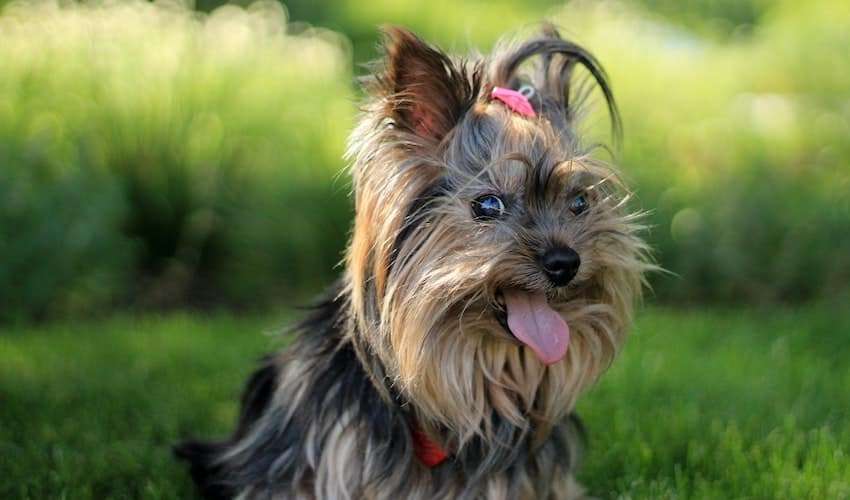 Yorkies go through heat cycles two to three times per year. Learn about Yorkie heat cycle stages and symptoms, periods of fertility, and breeding in this guide.

The Dog Tale is reader-supported. We may earn a commission if you buy something through our site; this doesn’t change our recommendations.

Dogs have reproductive cycles that are not much different from that of a human. They cycle through periods of fertility and recovery. However, Yorkies and other small dogs tend to go through more rapid heat cycles than larger breeds. Keep reading to learn more about Yorkie heat cycles, signs, and symptoms.

What is the Yorkie heat cycle?

The heat cycle is the reproductive cycle of a dog similar to the menstrual cycle of a human. It consists of four stages that repeat themselves every five to six months.

The first two stages of the cycle are marked by bleeding, swelling of the vulva, and behavior change. These two stages usually last between 14 and 21 days. The last two stages are a time of rest and recovery, or in the case of pregnancy: puppy development, birth, and subsequent recovery. Cycles can vary from dog to dog and they also can change as the dog ages.

When do Yorkies go into heat for the first time?

This first heat cycle can begin as early as four months or as late as 18 months, with an average of 10 to 12 months. If your female Yorkie hasn’t had her first heat cycle by 18 months, it’s worth taking a trip to the vet to rule out any medical issues.

How long does a Yorkie stay in heat?

You can expect a female Yorkie’s heat cycle to last from two to four weeks. It can vary from cycle to cycle and may change as the Yorke matures. At full maturity, a female Yorkie will have a heat cycle every five to six months and will most likely go through more cycles per year than a larger breed. As she ages, the Yorkie may only have one cycle a year.

Symptoms & signs that your Yorkie is in heat

>> Read more: Why Do Yorkies Stink?

How to take care of a Yorkie in heat

It’s important to know that your Yorkie may behave differently when she begins the heat cycle. If she shows aggression, give her space and a quiet area free from children until she is feeling more like herself.

While your Yorkie is menstruating, you’ll want to keep her off of any furniture you do not want stained. To keep the mess contained, you could try using disposable diapers or even washable diapers. It’s possible you may not notice any discharge at all as some dogs clean themselves.

You also may notice the discharge has hardened into her hair. In this case, a bath or gentle dog wipes will quickly clean the area.

Males will be attracted to the female in heat before she is receptive to them. They can smell her pheromones on her and in her urine from several miles away.

During this initial stage, she may show defensive aggression to warn males to stay away. It’s probably a better idea to keep her away from males during this time and on a short leash. This is especially important during estrus (the second phase of fertility) if you do not intend for her to become pregnant.

Keep in mind, however, that a female Yorkie can become pregnant outside of the estrus stage. To ensure she doesn’t get pregnant, it’s probably wise to keep her away from males for three to four weeks once bleeding begins.

Female Yorkies can conceive during their first heat cycle, although this is not recommended as their body is not yet fully developed. They also can conceive at any time during the Yorkie breeding cycle. However, they are most fertile during the Estrus stage, usually between the 10th and 14th day.

There are two tests veterinarians can perform to determine ovulation and the best time to mate your Yorkie.

Should I spay my Yorkie (and when)?

If you have no intention of breeding your female Yorkie, it’s worth considering getting her spayed. This is an invasive surgery involving complete removal of the uterus and both ovaries.

Spaying your Yorkie will eliminate the option of pregnancy, the heat cycle, and all the symptoms that accompany it. This can have both positive and negative effects on your dog’s health (more on this below).

A Yorkie can be spayed while in heat, but she is more prone to bleeding and other complications from surgery. Most veterinarians prefer to wait until after your dog has had her first heat cycle to reduce the potential for complications.

Some veterinarians recommend spaying a puppy before her first heat. However, there is increasing evidence pointing to the recommendation to wait until the puppy is fully developed. A study conducted by veterinarians at Texas A&M University found that dogs sterilized before 6 months of age were more likely to contract parvovirus than dogs who were sterilized later, at around 1 year old.

If you’re thinking of having your Yorkie spayed, but are concerned about the cost, look into a veterinary discount plan from PetAssure. The program allows you to save 25% on any vet visit or procedure, including spaying procedures. No deductibles or waiting periods to worry about. How spaying may affect your dog’s health

A group of researchers from the University of Georgia studied a sample of more than 40,000 dogs and found that female dogs that were spayed lived an average lifespan 25% longer than unspayed dogs.

This same study found that sterilization reduced the risk of death from infectious disease and trauma, but increased the risk of dying from cancer or an autoimmune disease. Other veterinarians state that unspayed females have a greater chance of developing mammary tumors as well as a painful and serious infection in the uterus called pyometra.

On the whole, it seems that spaying is good for the longevity and health dogs, but you will need to consult your veterinarian for advice specific to your pup.

Although a female Yorkie’s cycles can change as she ages, she never fully experiences menopause. In her later years, she is likely to have shortened heat cycles, only one cycle per year, and reduced fertility.