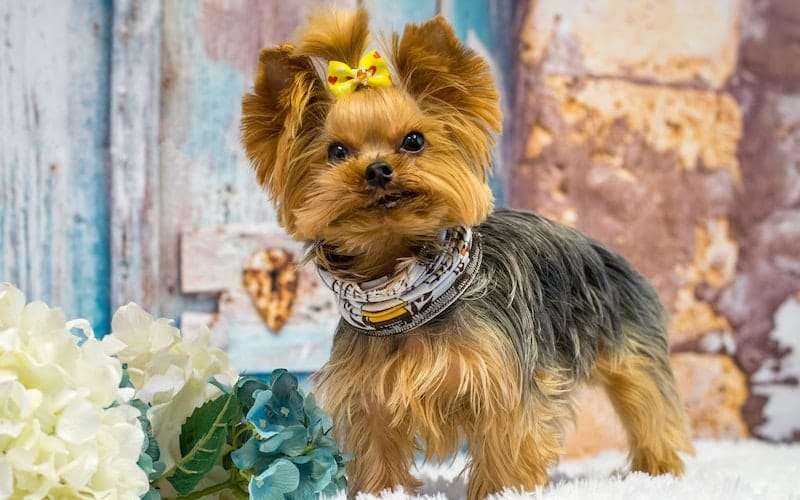 The average Teacup Yorkie life expectancy is just 7 to 9 years. This is significantly shorter than the lifespan of regularly sized Yorkshire Terriers due to additional health risks and the potential for trauma.

Nobody can deny that Teacup Yorkies are irresistibly cute. But these micro versions of an already pint-sized breed come with some significant health risks that you should be aware of before choosing a dog.

It’s important to understand that Teacup Yorkies are not their own breed. They’re a smaller-than-standard version of the Yorkshire Terrier and the result of breeders mating two undersized Yorkies to produce an even smaller pup. The average Yorkie lifespan is 12 to 15 years, so if you have a Teacup Yorkie, there’s a chance your pup could live that long as well.

However, due to increased health concerns and the likelihood of injury, the average lifespan of a Teacup Yorkie is significantly shorter than their full-sized counterparts. We’ll discuss these risks and how to improve your Teacup Yorkie’s lifespan below.

The Dog Tale is reader-supported. We may earn a commission if you buy something through our site. This doesn’t change your price or our recommendations.

>> Read more: How to Take Care of a Yorkie: Puppy Care from 8 Weeks to Adulthood

What is the average Teacup Yorkie life expectancy?

The typical Teacup Yorkie lifespan is just 7 to 9 years, although Teacup Yorkies could live as long as 15 years. This 9-year life expectancy is not an official statistic, but the possible outcome of the increased chance of traumatic injury and health concerns.

The chance of traumatic injury

Teacup Yorkies weigh just 2 to 4 pounds. This puts them at considerable risk of traumatic injury, which is already a leading cause of death in full-sized Yorkshire Terriers. The Teacup Yorkie’s tiny stature makes them easy victims of choking, bone fractures from jumping off moderately high furniture, getting stepped on, rough play by children, and attacks by larger animals.

How to reduce the chance of trauma

There are several steps to take to greatly reduce injury to your Teacup Yorkie. When in a crowded area, don’t allow your Yorkie to walk on the ground. It is very likely that the dog will get stepped on by unsuspecting individuals. This could be either in your home, or on a busy city sidewalk.

Closely monitor children around your Yorkie, or remove the dog from the situation altogether. Avoid allowing small children to hold these animals and teach older children the proper way to hold and interact with these small dogs.

Socialization with other dogs is great, but be vigilant to larger dog’s interactions with your Teacup Yorkie. Even medium-sized dogs or playful puppies can unintentionally pummel and injure such a small dog.

Provide pet steps to allow your pup to descend beds and furniture without jumping from potentially dangerous heights. Even a couch is probably too high for these little ones. Additionally, use a harness with the leash rather than attaching the leash to the collar. This will avoid injury to their trachea, which is common among small breeds. You can review our recommendations for the best Yorkie harnesses here.

>> Read more: Yorkie Growth Chart: How Big Will My Yorkie Get?

Yorkshire Terriers are generally healthy dogs, but they are prone to a handful of health issues. Generally, Teacup Yorkies are at an even greater risk of these health concerns due to their fragility and the likelihood of poor breeding techniques.

Improper breeding may play a role

Teacup Yorkies aren’t necessarily less healthy than the full-sized variety, so having a small Yorkie doesn’t mean it will have major health problems. However, all too often, Teacup Yorkies are bred in an unethical manner that leads to health complications and a shorter lifespan.

Irresponsible breeders may breed solely for size rather than health because they know buyers will pay more for a Teacup Yorkie. This unscrupulous process often involves breeding the runts of two litters, which are likely to have more health problems in the first place.

The result is a litter of adorable miniature puppies greatly prone to trauma and a number of health problems. These variables contribute to a shortened Teacup Yorkshire Terrier lifespan.

Be cautious about buying a Teacup Yorkie

If you are in the market for adding a pint-sized Yorkie to your family, do your homework first. Become familiar with the common health problems and extra precaution needed with tiny breeds and find a reputable breeder who has the integrity to breed for health rather than size.

Look for AKC-registered breeders who provide AKC registrations for the puppies, post-adoption support, and health guarantees. Avoid buying from puppy mills, pet stores, breeders who ship puppies, and breeders who specialize in teacup or miniature sizes.

Ask to see the parents of the puppy. If you are refused, it should be a warning. Note the health of the parents and how the puppy interacts with the mother. If something seems off, don’t feel bad about walking away.

Kerri focuses on finding healthy, natural dog products without any nasty chemicals or byproducts. When she’s not inside with Max and a MacBook vying for position on her lap, she’s outside enjoying the sunshine with a furry companion.

We use cookies on this site to optimize site functionality and give you the best possible experience. By using this site, you accept our use of cookies. Learn more.